Are you a luddite?

Many will be familiar with my post A critique of the Cochrane Collaboration, it’s been the most viewed article ever published on this blog.  Continuing in the theme was Some additional thoughts on systematic reviews and more recently Evidence, hourglasses and uncertainty.

They all point to the current methods employed in systematic reviews (as exemplified by Cochrane) being a mess! As a type of summary, a few problems:

More evidence that my perspective is correct is shown is the presentation Does access to clinical study reports from the European Medicines Agency reduce reporting bias? submitted to the Cochrane Colloquium in Vienna.  The conclusions:

It’s a testimony to Cochrane’s openness to allow such ‘dissent’ to be published.  It’s a dissenting view as the current Cochrane methods rely almost exclusively on published journal articles; unpublished clinical study reports – virtually unheard of. But that’s Cochrane; on one hand a business trying to maximise it’s business model but on the other a collection of individuals doing there best to improve methods.  As an outsider, I find this tension fascinating. Why? Because the best one can say for Cochrane’s methods (alongside most other SR producers) is that they are likely to produce ‘ball park’ accuracy – in most cases you simply cannot rely on the methods to produce results you can trust.  And this is where the tension comes, if they were being transparent, they would say ‘buy the Cochrane Library, most of the SRs are likely to be out of date and many are likely to be innaccurate’ which even I can see is not great for sales.

But this bring me nicely to diffusion of innovations – an area I studied for the PhD I never completed!  The Wikipedia article summarises it nicely by saying its “..is a theory that seeks to explain how, why, and at what rate new ideas and technology spread through cultures.” The spread of an innovation is characterised as an S-shaped curve: 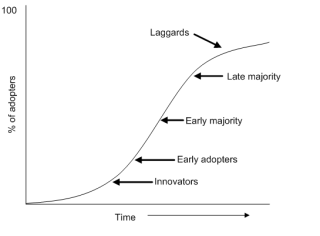 In relation to systematic review methods, where are you on this scale?  If, like me, you think there are serious problems by relying on published journal articles you’re probably at the innovator side of things.  If, however, you think current methods are great and there is no need to change you may well be a laggard.  But, the majority (those that are feeling uneasy) are likely to be in the middle.

Around 6 weeks ago I wrote the article Logging in to Trip which provoked much negative comment. I have clearly not rushed to reply properly but that’s because I’ve wanted to properly think through the issues.  In short, the reason for asking people to log-in meant we knew more about the users and could therefore improve the service we deliver.  As I see it there are two connected issues of concern:

One suggestion (from Paul, see comments in previous post), in relation to the second point, is to focus on our refine by clinical area feature.  This is an already available system which tags documents by clinical area.  So, an article titled ‘Cholesterol and the elderly‘ would be tagged as cardiology and geriatrics.  If a user did a search for, say, cholesterol the above document would be returned in the results, alongside many others.  But if they decided to refine by geriatrics, the above document (alongside others tagged with geriatrics) would be moved to the top of the results.

Below are two images showing how it currently works:

The differences are clear and shows the potential for the system.  For me, it’s about helping users find the answers they need really quickly.  An anaesthetist, interested in ‘awareness’, would find the results of the ‘normal’ Trip disappointing but by selected anaesthesiology all the results are relevant.

As mentioned above this system is available already and can be accessed as shown below:

It’s not particularly developed and we could definitely improve it:

Ultimately, it might serve a similar role as profiling users in improving the search results.

I have the great pleasure of being part of an EU-funded project called KConnect.  It’s a group of academics, health care providers and commercial organisations (such as Trip) working together with the broad aim of innovating to improve search.

One early result has been a collaboration with the Institute of Formal and Applied Linguistics at Charles University in Prague to introduce a very nice multi-lingual tool for Trip.  It allows users to search in French, German or Czech, with more languages due in the next 6-12 months.

As you’ll see in the image above we have added a discreet link for ‘language options’ which, when pressed, reveals the three language options.  Once pressed the user can enter search terms in the selected language.

In this second image you’ll see that German has been selected and the search term bluthochdruck added.  This has been translated to hypertension and the results have also been translated into German.

It’s a very simple yet powerful system which will only improve over time as the translations get even better and more languages are added.

Below is a pie chart showing the country of origin of every personal subscriber to Trip. 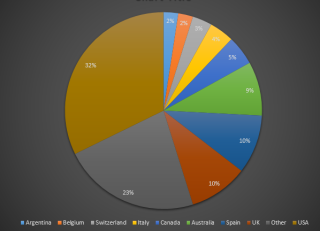